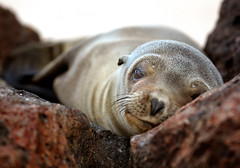 Having posted PW Luce to mark the anniversary of his death and having been reminded of his description of animals on a Pacific Northwest totem pole, we were struck by the reference to “Un lion de mé avec des dents”. We say lion d’mé for sea lion, and a seal is a loup-mathîn (although there’s also the old expression vielle fil’ye – or else syraine, séraine and sirène, which also mean “mermaid”).

Walruses are a puzzle. Old Jersey sailors must have called them something, but unless some literary reference turns up we won’t know what they called them – so now we simply describe them as des loups-mathîns à d’fenses (seals with tusks). Although, if you look at PW Luce’s poem, the “sea lions with teeth” could well be walruses as well.