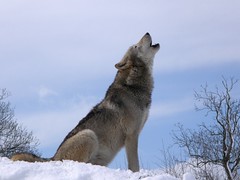 Literally this phrase means “the crossroad of the wolves”. Quite what wolves have to do with it is unclear, but it refers to the sort of place where people’s paths cross, where you bump into loads of people you know.

This is another phrase referring to groups of people. Literally it means “the festival of cherries”. An alternative version is la foule des tchoeurs = the crowd of cherries. This refers to time past when fruit-growing was especially important in Jersey. Besides the omnipresent apple orchards, quantities of cherries were cultivated and, when they came to market in Saint Helier during the month of July, crowds of people would flock to buy them. So if you want to remark on how crowded the streets are at any time of year, this is an expression to use.

While we’re on the subject of crowds… A good word for a crowd of people you have to fight your way through is la brouiole. It’s a word from the East of the Island, and a pronunciation tip is to think of saying it like “brew-yoll”. Another word (actually it may be the same word originally only from the West) is la brouoille (think of saying it in one syllable like “br-woy”) which is chaos, hurly-burly or a chaotic crowd.