A short tale about a short tail 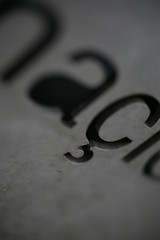 A cédile is a cedilla – the little hook or tail under a letter c that tells us to pronounce it as /s/. It also tells us something else: that the name or word has been imported from French. The French language uses quite a lot of cedillas to denote a c pronounced as /s/ in front of vowels a, o, and u (a c followed by other vowels is pronounced /s/ anyway). However, Jèrriais generally doesn’t need a cedilla because sound changes have in many cases turned a /k/ into a /sh/ which we write ch.

French verb conjugations sometimes require a verb stem ending in c to take a cedilla in positions where Jèrriais grammar doesn’t require it:

However, sometimes the cedilla is grammatically unavoidable, especially when dealing with borrowed vocabulary:

What happens in the future, though, when we want to conjugate one of the few verbs with a stem ending in c? If you favour the form annonchi, for example, then writing j’annonch’chais with a long ch presents no problem. What, though, if you favour the form annoncer? Presumably you could say j’annoncéthai, for example, but don’t most people use a long /s/? But how to write it? Lé Jèrriais pour tous gives no specific guidance, but following the rules logically, one would expect to see ç’ç – but would anyone write that, though? We have a future form annonc’sa attested in text of the highest literary register possible. It is simple, but not transparent. What are the alternatives? Comments welcome.

Verb s’gencer/s’genser exists in both spellings, so following that pattern might be one solution.

Some words and names with cedillas are simply borrowed like that: Français has been borrowed from French like that (although we could just as well spell it Franceis like Wace did), and the Dictionnaire specifically cites the name Françouais under the entry for cédile. The French form Français has, presumably, been preserved under the influence of French as an official language. We’ve borrowed Provence and Provençal (although Provenche and Provenchais are Jèrrified alternatives).

Borrowings and their alternatives

Some words with cedillas we’ve borrowed, but we still have native alternatives available.

There are a couple of borrowed words with cedillas that have almost completely displaced native Jèrriais words.

Some prominent French words with cedillas have no related equivalents in Jèrriais (they may be recent developments for which Jèrriais has developed its own vocabulary, separate from any common ancestor).