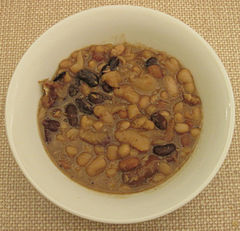 The Jèrriais word pais covers beans and peas (you need to specify which type of legume you mean). Pais au fou is beancrock. The word pais, like French pois and English pease, derives from Latin pisum (English pease, which survives in pease pudding and peasecods, was misinterpreted as a plural and a new singular was created: pea – see our post Turnips and paparazzi for similar reanalysis).

But the Latin word pagus (a country district) has also come down to us as the word pais, meaning an area – most often these days in phrases and in placenames referring to a rocky area. In French it’s ended up as pays, which we’ve adopted as our standard word for country: Jèrri est un p’tit pays (Jersey is a small country). In English, pagus is the root of pagan (i.e. a country bumpkin who’s not yet adopted Christianity).

Pais survives in its meaning of “countryside” in phrases such as à travèrs pais (over the fields, cross-country). We can find a number of placenames:

In Guernsey, they’ve got rock stacks similarly called Les Tas d’Peis. Now, at some point the rocks got their names Frenchified on maps, as so many of our indigenous placenames have been mangled. In Dgèrnésiais, peis is pea, the equivalent of our pais – and so instead of writing them down in French as Les Tas de Pays, the form Les Tas de Pois was recorded instead, which led in due course to the English name of “Peastacks“.

Les Tas de Pois, rocks at Pen-Hir in Brittany, acquired their French name in the mid-C19th. Does anyone have any idea how they fit into the story?