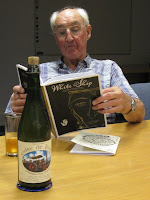 Our next meeting will be held in the AM Room on Wed. April 4th at 8.00pm to continue our work and studies!

Salutâtions tout l’monde. Tchi temps, ch’est comme les d’sèrts siez nous; la tèrre est dêjà sècque. Thank you to everyone who attended last month’s meeting. We continued the sorting and selection of the literature archive and improved our numeracy with a counting game.

We continue with the struggle for useful time in the broadcasting of La Lettre Jèrriaise. The native language seems to have been classified as a foreign language by BBC Radio Jersey and grouped with Portuguese and Polish, and sometimes not given the full time allowance. In addition, a copy of each ‘Lettre’ has been demanded, along with a translation….despite there being no-one in the BBC to verify that the translation is accurate. This is apparently because something in another language was broadcast which would not have been permitted by the BBC had the controllers known the content. This has resulted in several people withdrawing from the group of readers because of the extra time and effort this now entails.

The next meeting of the Congrès will include a progress report on the above and will involve a reading of its Constitution as after many years of Committee work several members are retiring and replacements are not available at present.

On a happier note more Jèrriais will be on display at La Hougue Bie from this weekend on the lovely display in the old Agricultural Museum.
Finally, it was amusing to note that St. Ouën has now joined Ouaisné (or Quaisné on the snack-bar notice in the Ouaisné car park). In the last parish magazine issue of Les Laurentins….a certain advertisement carried its address as……St. Quen!!