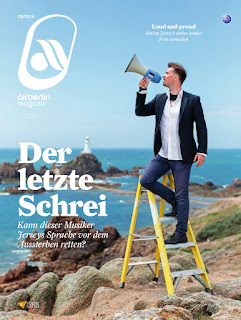 The German airline Air Berlin flies constantly all over the globe and its monthly in-flight magazine has a summer readership of 3 million people per month. The August edition has just been released and it features Badlabecques’ lead singer Kit Ashton on the front cover. He’s standing on a step-ladder at Corbière, shouting into a megaphone, accompanied with the headline ‘Der letzte Schrei’. This literally translates as ‘The Last Cry’, but also has a double meaning as it is a common phrase in German meaning ‘the latest craze’.

The article itself, published in German and English side-by-side, tells the story of the band so far as they promote and popularise our local language Jèrriais. It also features local beauty spots from Mont Orgueil to St. Ouen’s bay, and even has a ‘Jèrriais for Beginners’ section.

Kit says:
“Of course I jumped at the chance to get our band, our language, and our beautiful island highlighted in this way. We spent a couple of days with journalist Natalie and photographer Tim, seeing the island, taking photos and talking. Then there was the gig.”

The article describes a Badlabecques gig at The Watersplash, part of a fundraiser for local children’s charity Brig-y-don, which, after a few hurdles, went very well.

Kit: “This is another great example of our special language and culture marking Jersey out as unique and fascinating to an international audience. Jèrriais may endangered at the moment, but this article shows why we should save it – not just because it’s part of our heritage, but because it marks us out as different, and within the island it can help bring us all together. Our community as a whole should celebrate it and businesses should make it part of their branding.”

German journalist Natalie Klinger agrees, and was impressed with Jersey and our local community: “Everyone in Jersey was incredibly helpful – having to source a megaphone within a few hours proved to be quite the challenge after all, but everyone we approached (including a fireman and a police woman) was so nice and eager to help us out.” Eventually the crew was loaned a megaphone by Delta Production Services.

Miss Klinger was particularly impressed by our West coast:
“My favourite place in Jersey was probably St. Ouen’s Bay at low tide – walking along the endless beach made me feel quite small in a very grounding way.”

Photographer Tim White was also struck by Jersey’s coastline:
“Jersey is one of the easiest, most photogenic places to take pictures of – almost anywhere you point the camera along the coast is a picture postcard. At sunset it’s really quite stunning.”

The article can now be read on Air Berlin flights or viewed online at: http://magazin.airberlin.com (August edition, pages 39-47)