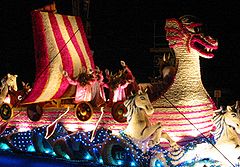 From the Viking word-hoard – A dictionary of Scandinavian words in the languages of Britain and Ireland by Diarmaid Ó Muirithe, former professor of literature at University College Dublin, and author of the Words We Use column in the Irish Times.

At the beginning of the 9th century the growing population of the three great branches of the Scandinavian race who people the countries abutting the Baltic – the Norsemen or Northmen, the Swedes and Danes – began a great outward movement which was caused both by political changes and their enterprising nature. Thus the 9th century came to be known as the Age of the Vikings, Víkinga-Öld.

The Danish emigration directed its course to the north-east of England. The second migration was Norse, whose settlers gradually peopled the coasts of Ireland, northern Scotland and the Isle of Man. They left a lasting linguistic heritage. This book is a glossary of words in the various languages of Britain and Ireland which owe their origin to the intrepid raiders and merchants of Scandinavia.

Although this book is interesting and very useful up to a point, one of its flaws is that the author has interpreted “the various languages of Britain and Ireland which owe their origin to the intrepid raiders and merchants of Scandinavia” to exclude the Norman languages of the Channel Islands. This reduces its usefulness for reference to common Norse roots and requires cross-referencing with other works (such as Jean Renaud’s Les Vikings et les patois de Normandie et des Iles Anglo-Normandes) to understand the relationships between the languages of the British Isles. There is a lack of logic in the inclusion of the Isle of Man within the book’s stated scope of “Britain and Ireland” but the exclusion of Jersey and the other Islands. The introduction also glosses over the influence of Norman and its Norse elements following the Conquest(s).

There is at least one mention of the Channel Islands in the book. The entry for “mug” refers to “Normandy dialectal moque and the Guersney mogue“. The misspelling of Guernsey is symptomatic of the sporadic errors marring the book – and the omission of Jèrriais also rather undermines one’s confidence in the book.

That said, with all its limitations, this book fills a gap and is eminently dippable into. Here are a few examples (with Jèrriais cognates that don’t appear in this dictionary, for comparison):