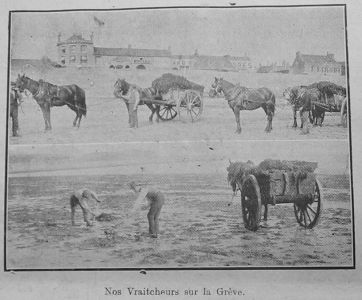 À la siette dé The Jersey Kitchen, né v’chîn des buts entouor la tchuîsinne Jèrriaise dé d’dans The Jersey Independent and Daily Telegraph dé 1862.
Following on from the The Jersey Kitchen, here are some culinary observations from a series of articles “Jersey Jottings” published in a Jersey newspaper in 1862.

For the comfort of the driver’s postillions’ and reapers’ “inner men” – if we may use such a term where the other sex is concerned – there is a plentiful supply of a national edible called a “Vraicking biscuit,” (Gallette de Vraic). This in form may be said to resemble a Bath bun of Brobdignagian dimensions, or a north country “whig” – with currants just within shouting distance of each other, and no nearer – currants that are exactly like angel’s visits, sweet, exceeding limited in numerical strength, and widely dispersed. Not at all a rich morsel, the “Vraicking biscuit” is anything but a depisable [sic] one, and being at once sweet and wholesome, is famous “plenishing” for a hungry man’s stomach. At the same time we would warn those who estimate the goodness of the pastry cook’s wares by the amount of indigestion they produce to avoid it as they would the devil. The carts are not destitute of drinkables. Each one carries its plethoric cask of cider, and each cask looks as if it had come from the hands of one and the same cooper at one and the same time. We dare be bound the cider is good; as it is home-made.

It appears that it was formerly the general and is yet the partial custom for the party who proposed going a-Vraicking to assemble at the house of one of them, and, without at all respecting Lent, to partake plentifully of the flesh-pots of Jersey, to wit, pork and beef, and pudding with or without raisins. If minus the latter it was or is one made of dough with a generous admixture of eggs, boiled between a couple of cabbage leaves, and called a rouallo; it is presumed after the first Duke of Normandy, ROLLO! This, however, is not authenticated; perhaps the present Duke of Normandy will kindly enlighten us. we now take leave of this section of “Jersey Jottings,” and (for the present) our readers, to whom – au revoir!

A rouôlot has nothing to do with Rollo; it’s the word for a roly-poly or roll (it’s also a sirloin, and a roller, and the nickname for someone from Saint Mary).

For a poetic description of vraicking and galette-baking, there’s Nicholas Bott‘s Chanson la pèche du vraic et pendant la grande Charue (of which an English translation can be found in The Toad and the Donkey).