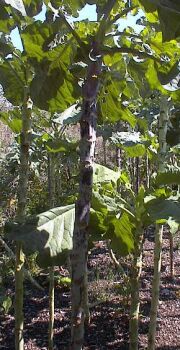 This article in Punch magazine seems not to have been left unmined by a feature writer for a New Zealand newspaper, the Clutha Leader. In the 11 August 1893 issue we read, inter alia:

The Channel Islands — Jersey, Sark, Guernsey, and Aldernay — are the only portion of the old Duchy of Normandy which now remain to the British Crown. They have a Government of their own, and the old feudal system still remains to a certain small extent ; but they are under the British protectorate, with a Governor. It is essentially an English place, and most of the people speak English, although a few speak French, and some a sort of gibberish between the two.

The guides who accompany the coaches are very ready-witted and amusing. If you pass a dark sheep, they will tell you it is not black, only a little sun burnt! The French coast is quite close within sight, so they say : ‘There is a fine breeze blowing to-day, so it affords a fine opportunity for those who have not already acquired the French accent to do so now ; all you have to do is to open your mouths and breathe it in.’ And when he is met with an incredulous laugh, he always says : ‘ All right ; if you don’t believe me, ask the driver,’ and of course the driver confirms what he says ! We passed some tall cabbages. ‘Those cabbages frequently attain a height of 20ft— (oh! oh!)— well, if you don’t believe me, ask the driver.’ ‘Quite true,’ says the driver — ‘if you measure up one side and down the other, etc’ There are also a great many schools and ladies’ colleges on the island. French is supposed to be particularly well taught at the schools but whether they are taught it by their masters or acquire it from the breeze blowing from the French coast, of course I wouldn’t presume to say. They have a militia on the island, and every citizen has to put in a certain number of drills every year for 10 years. There is plenty of granite — not unlike Aberdeen granite — and one or two churches, several hundreds of years old, which had been built with it, seemed as if thev would last many hundred years more. So the guide, who has a banjo with him, sings a song which he calls the Jersey National Song, the chorus of which runs as follows : —