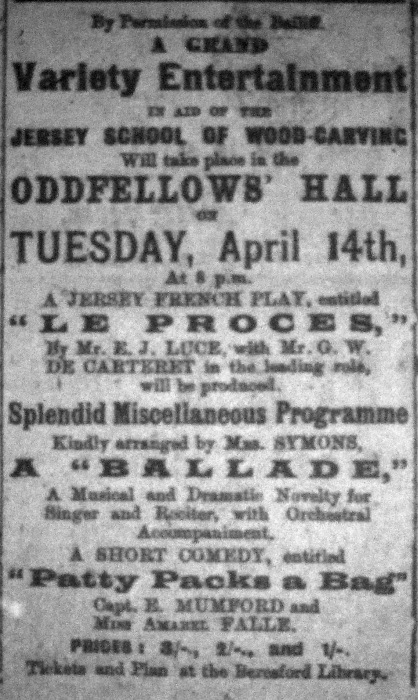 (…) Among those present we noticed Sir William Venables Vernon, Mr. Hamilton (M.P. for Altrincham) and Mrs. Hamilton, the Very Rev. the Dean and Mrs. Falle, Col. and Mrs. Rundle, Col. G. M. Gloster and several officers of the Devonshire Regiment, Col. Montgomery, Col. and Mrs. Scott, Major and Mrs. Riddell, Capt. and Mrs. Luxmoore (…) and many other prominent residents.

The first item on the programme was a highly amusing sketch in Norman-French entitled “Le Procès,” a capital little piece from the able pen of versatile Mr. E. J. Luce (of the “Nouvelle Chronique”), by whom it was produced. The scene is set in a Petty Debts Court, and the plot centres round the troubles of a countryman whose life has been made well-nigh unbearable by reason of the constant nagging of his mother-in-law, and who, in a fit of despair, throws her into the sea with intent to murder. He only succeeds, however, in completely spoiling her clothes and in embittering to a greater degree the woman’s temper. She sues him for the damage done to her clothing, and the proceedings, thanks to the gunpowder-like attitudes of both litigants, were very amusing.

The chief honours fell to Mr. G. W. De Carteret, who, as “Laïesse Ernon,” the defendant, had a difficult rôle and did it to perfection. His performance was such as to give the part all the interest with which it might be invested, and his success was truly brilliant. Mrs. Mourant, as “Mrs. Lesbithé,” the plaintiff, was also extremely good. Her make-up was capital, and she made the most of her opportunities for showing off her undoubted ability as a Norman-French histrion. Mr. J. F. Le Cornu, as the Judge, was “great.” He made all that was possible of his opportunities, and raised many a hearty laugh by his mannerisms and judicial witticisms. The witnesses were three in number, Miss E. Gibaut and Messrs. G. F. Le Feuvre and C. Syvret. All did splendidly, but Mr. Le Feuvre’s performance was particularly noteworthy. His evidence was typical of the witness who sorely tries the patience of any Court by beating about the bush instead of going straight to the point. Minor parts were ably sustained by Mr. G. W. Bertram (Greffier) and Mr. H. B. Jerram (Officer of the Court). The scene was completed by the presence of “real live reporters” from three of the local publications and a number of spectators. (…)