Alice in a World of Wonderlands 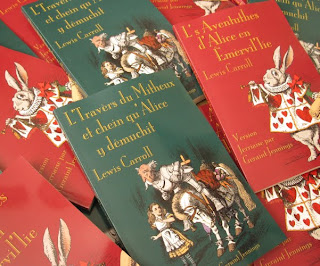 Alice in a World of Wonderlands
Forthcoming in June 2015

Includes general essays, essays about each language and the translation issues encountered, appendices, notes on contributors, a sixteen-page color section of book covers, and an index, along with numerous illustrations.
(…)
Jèrriais · Geraint Jennings

Contains “back-translations” into English of eight pages from Chapter VII of Alice’s Adventures in Wonderland with footnotes explaining what the translator did and why. Included are the back-translations of the first edition in each language and, when available, a recent one. Four tables show how certain phrases were translated into the various languages. Most back-translations include an illustration of the book cover.
(…)
Jèrriais 2012 Geraint Jennings

Consists of a bibliographical checklist of more than 7,600 editions of Alice’s Adventures in Wonderland in 174 languages (some listed as forthcoming) and over 1,500 editions of Through the Looking-Glass in 65 languages.
(…)
Jèrriais Geraint Jennings