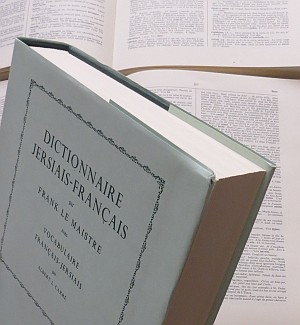 The publication of the Dictionnaire Jersiais-Français in 1966 was the result of the lexicographic labours of one man, Frank Le Maistre (1910-2002). His son, Jean Le Maistre, remembers how his father worked on the dictionary for many years:

“Lé Dictionnaithe, as we call it, was truly a labour of love. It took over 25 years of research across the Island and a further 10 years to actually compile. It translates over 17,000 Jèrriais words into French and often illustrates their use in a variety of contexts employing in excess of 750,000 words to do so. Remarkably my father achieved all of this working entirely on his own whilst, during the period of compiling the dictionary, also running and working on the family farm.”

More recently, the Dictionnaire Jersiais-Français has been followed by English-Jèrriais and Jèrriais-English dictionaries, but the encyclopaedic nature of the Dr Le Maistre’s dictionary, containing as it does a store of knowledge of Jersey customs, beliefs, traditions, recipes, and historical information, means that it is unsurpassed as a source of information about Jersey’s own special language and its landscapes, events, lifestyles, buildings, and people.

For interviews about how the Dictionnaire Jersiais-Français came about, contact: